On what turned out to be the wettest March day in 27 years (in Sydney), I went with a friend to the Armory Wharf Cafe, Newington for lunch. Before going there it looked like the clouds were clearing, and in changing over cars to get there, we left our umbrellas behind. Bad move. By the time we got to the Armory Wharf it was bucketting down again. We sat in the car for about 20 minutes, thinking the rain was going to ease up, but alas, it didn’t. We decided to to make a dash for the Cafe, getting totally saturated in the short distance between the car park and the Cafe! 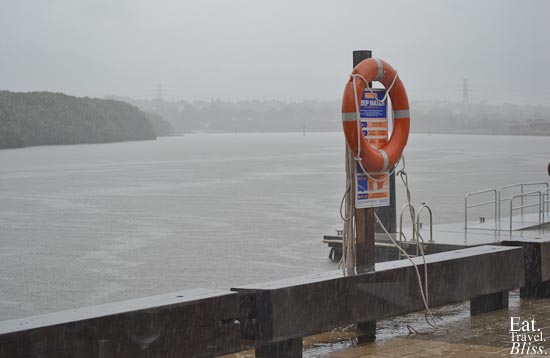 That was our view from inside the shelter of the Cafe. You can see the big raindrops against the dark wood.

The Armory Wharf Cafe is set on the site of Building 13 of Newington Armory. The Armory stored armaments from 1882 until about 1961.

Situated on the armory wharf, the Cafe has 180-degree views of Parramatta River. It would all look quite different on a sunny day! 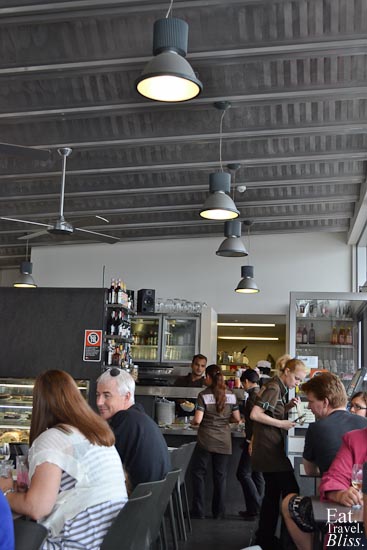 The staff were friendly and super helpful, always wanting to serve us.

The Cafe building is architecturally interesting, playing on the military theme, with open air areas for better weather! With the rain I didn’t get to take more photos of the building or surrounds. It really does take advantage of the water views.

The Cafe has an interesting menu, with influences from around the world. My friend ordered the pork with green rice, a mango chutney, and roasted cherry tomatoes: 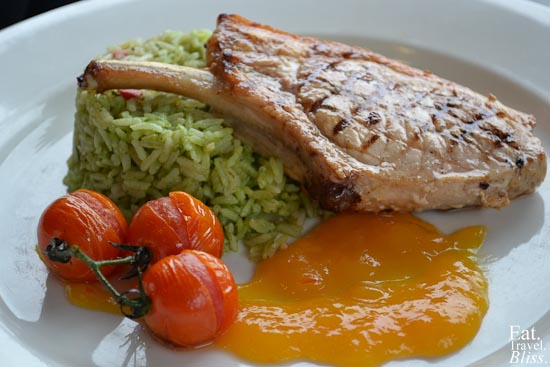 I ordered the Middle Eastern lamb confit with a cucumber, tomato and chickpea salad:

That was light and tasty. And then for dessert my friend ordered the lime creme brulee: 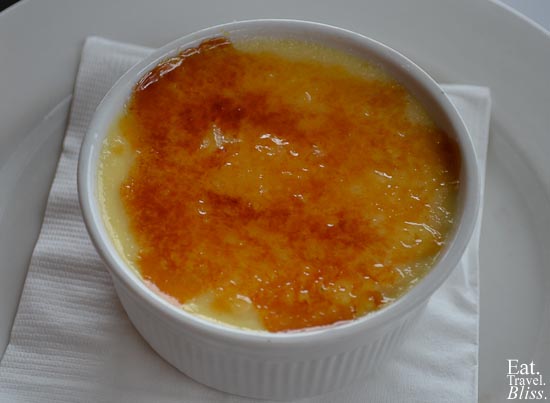 And I had the black forest mousse, with a light chocolate mousse at the bottom, cherries on top, served with a lady finger biscuit:

That was light, not too rich. I’d like to go back, and try another meal there sometime, on a sunny day. It would be great for breakfast, looking out across the water.

A bit about the history of the Armory

The land where the Armory is located was granted to the Blaxland family in 1807. As noted above, it became a place for storing armaments from 1882 until about 1961. The Navy departed the Armory site in 1999, in the final stages of preparation of the area for the Olympic Games.

The Sydney Olympic Park web site has more details about the Naval history of the Armory.

Venues now available at the Amory include an Art Gallery, an Amphitheatre, and a Theatre. There is an open plan studio with space for up to 21 artists.

ArtExpress at the Armory Gallery

At one side of the Armory Grounds, you can walk through a rail tunnel to Building 18, which used to be an armaments store, and now has been set up as an art gallery. The current exhibition is ArtExpress, art created by high school students. The works there were profound, imaginative, confronting. I kept on thinking as I was looking at the incredible variety of art created that I don’t remember having anything like that level of creativity or having such a grasp on the world as these students have. Well worth seeing. There’s something about the location which adds to the separation of the mind from daily activities, to be free to absorb the art there.

See the Armory Wharf Cafe web site for the latest details, but here are the current details (at time of posting):


So, tell me, where would you go on a rainy, wet weekend day?